Join Our Newsletter And Receive Our Free Top 25 Recipes Book!

Celebrating the Last Days of Summer in Montauk 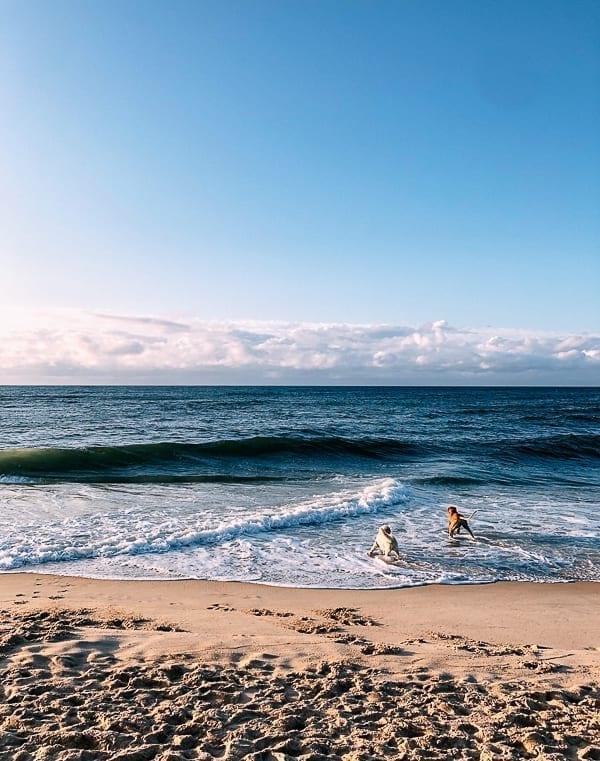 This summer, we found ourselves in Montauk as a whole family for the first time in almost 20 years (tried and failed to write that sentence without feeling old).

The last time we visited as a family, Sarah and I were much younger. My memories of that trip are of camping on a deserted beach to fish from shore, getting way too much sand in our tents, and watching our dog Jake steal bait clams from our unsuspecting cousins.

This time around was a little more genteel. A few weekends ago, we traversed Long Island to hit the beach, hike, catch fish on a party boat, and check out this mysterious “Hamptons” that so many fellow New Yorkers seemed to be flocking to every summer weekend.

When it comes to things to do in Montauk, there’s a great mix of high and low. Unlike the perfectionist polish and boat shoe glamour of East Hampton, Montauk offers a blend of upscale and casual dining options, and the main drag feels more like a beach town than a seaside version of Fifth Avenue or the village.

Sure, it’s far more trendy than it was before it became an extension of the Hamptons scene, but it still boasts a more laidback energy that we took advantage of, at local haunts that stand the test of time among locals and visitors alike.

That said, a couple tips for getting to Montauk from New York:

All are popular options because Montauk and the Hamptons are popular destinations. I often find myself walking by a Jitney stop in Manhattan, and it’s clear that whichever mode of transport you choose, you’ll find a very particular persona waiting for their chance at weekend bliss…big sunglasses, perfectly manicured, loafered and ready to go with their beach totes and stowable dogs.

That said, I was very much excited to don my own big sunglasses and see what all the hype was about! (With our larger, non-stowable dog in tow.)

All I can say about accommodations anywhere in Montauk or the Hamptons is $$$$$$. Like, CRAZY prices for Airbnbs, hotels, and even motels. Book early or find friends with a spare room if you can.

Our cousins have a condo there, which made our last minute trip possible. We all squeezed into the place, along with my parents’ RV (if you have or would like to rent an RV, RV campgrounds can be an inexpensive option for staying in the area; just book very early). This is perhaps the biggest reason why it’s taken 20 years for us to go back!

That said, plenty of people do manage to find relatively reasonable accommodations there. One way to enjoy it is to go around this time of year––after Labor Day, when the weather is still warm and the prices aren’t as inflated.

Things to Do in Montauk & the Hamptons

(as told by The Woks of Life)

We wanted to check out everything the area has to offer: beaches, seafood, farm stands, restaurants, fishing, hiking, and shopping. Here’s what we did and where we went!

The Montauk Point Lighthouse is located in a state park with a little museum offering fun facts about how Montauk was settled and its longstanding military and fishing history.

There’s great views of the shoreline, and if you plan ahead, you can time your entry to climb to the top of the lighthouse. What I enjoyed the most was reading about women entering the fishing scene and these two [email protected]$$ ladies that caught some really really really big fish.

When you’re done with the museum, you can walk down to the craggy beach, and there’s a short trail as well.

There were lots of local farm stands that we drove by. Ones like Amber Waves are more established and have little markets where you can buy produce and other local goods (you may have heard them name-dropped by Ina Garten! More on her in a bit…Can’t write about the Hamptons and NOT talk about Ina!!!)

We stopped by a more anonymous one, drawn in by sunflowers.

My sister ran into an old coworker, and as my mom put it, there’s nothing quite like seeing and being seen in the Hamptons…

So we technically had a really late lunch that could have been dinner (despite an existing dinner reservation), but we HAD to stop by Lunch for lunch! Also known by its other name, The Lobster Roll, this Amagansett standby is a must-stop.

We had our hearts set on a big old lobster roll with a toasted buttery bun, and my personal weakness, fried clam strips. We also sprung for onion rings, fried calamari, and a New England clam chowder (what’s that they say about moderation? Hold onto your arteries for this one!).

It was delicious. The marinara was wonderful, the clam strips were perfectly crispy and tender, the clam chowder was full of clams (not overwhelmed by bacon, also!) and the lobster roll was succulent with not too much mayo. A local beer or perhaps a Coke with lemon are the perfect drinks to wash it all down.

We were lucky to sit outside, where a cool breeze soothed our fried food sweats, and we could enjoy the garden.

Surf fishing is probably my dad and his cousin’s favorite summer pastime. They wake up at 6am, blearily gather their fishing gear, and head straight for the beach with the dogs, where they set up rods and a bucket of clams.

My dad got lucky one morning and caught a big striped bass (sadly, not big enough to keep––link to New York State saltwater fishing regulations here).

This naturally enticed me to wake up early the next morning to go with them. We caught a couple of smalls, but watching the sun rise, investigating seashells, and playing with Barley and slobbery gentle giant Ripley (our cousin’s Great Dane) was worth the early morning wake up call.

Plus, it may be the case that *thinking* you have a fish when your line is actually just caught on some seaweed is pretty close to being as much fun as actually catching a fish.

There are some great secluded beaches in Montauk.

In the early morning, when the tide is low, crabs and horseshoe crabs can be easily spotted and investigated by inquiring minds. I personally am of the opinion that if you don’t explore a tide pool, or check out a mussel-coated rock, you didn’t really go to the beach.

This was definitely the highlight of the trip! 4 hours in the afternoon spent on a fishing boat. There were lots of families on board—looking for a good time and the thrill of fresh seafood.

We got in line early to board, staked out our spot, and the boat chugged out of the dock. We cruised away from shore for an hour, while the mates came around with rods, bait, and a few wise words of instruction. When the horn sounded, hooks and sinkers hit the water!

The more skilled fishermen among us advised on feeling for nibbles and setting the hook on the fish to reel them in. Of course my dad (Bill) is the veteran fisherman, but my mom (Judy) is the secret fishing ninja. I tell you, there’s something about that woman—it doesn’t matter where we are, she’s an expert at spotting, picking, and catching free food!

Things started off slowly with a sea robin or two, with their big winged fins.

Things got really exciting when we caught our first big fluke! Flat, spotty brown on one side and white on the other, they wiggled their way to the surface.

Other catches included porgies and black sea bass (not including the hooks that got caught on the lines of people on the other side of the boat).

The most exciting part of the day though, had to be when the captain announced that we only had a few minutes of fishing left. Slightly dejected, I thought to myself how much I had wanted to catch a black sea bass to round out my sea robin and fluke. As if someone in the ocean had a microphone to my brain, I suddenly felt a tug on my line, and a large (keeper!) sea bass emerged.

I was feeling puh-retty good and slightly smug when of course, a minute later, Sarah caught a bigger (but only slightly!) sea bass. And then not a minute later, my mom also screeched that she had a fish on the line, and Justin, Sarah’s beau, who for all 2 HOURS of fishing had caught nothing, suddenly had hooked one himself. 4 fish, 3 minutes, and priceless photos to prove it.

On the trip back to the harbor, the mates weigh the fish to see who won the pool for biggest catch, and they filet catches.

They work quickly and purposefully, gutting them, filleting them, and tossing the scraps to the sea gulls who rush the back of the boat to snatch the castaways.

All told, here was our catch, which, naturally we brought back to steam with soy sauce, ginger, and scallion!

There’s a good handful of well-loved restaurants in Montauk and nearby. Some of these we were able to hit on our trip, and others were recommended to me in confidence by friends who are diehard Hamptons-goers.

Other places on our list, but didn’t have enough meals in a day for:

I’m simultaneously ashamed and proud to note that I enjoyed my first raw oyster! It was briney and smooth and I’m very nervous that I’ve opened a pandora’s box for yet another way to throw more money at food.

But I’m not that sad about it. Much is said about lobster, but definitely spring for a half dozen raw oysters!

We were traveling with family and two dogs, so it was inevitable that we’d hit a trail or two. Shadmoor State Park had a couple of easy trails that weren’t too strenuous and good for dogs and young kids. Go further and you’ll hit a beach!

Amagansett is a picturesque town between Montauk and East Hampton. We took an afternoon stroll through to walk off our fried food, and found a great mix of boutiques and cafes, and a particularly excellent record store (Innersleeve Records) where Sarah and I both managed to sidestep a fight over who saw the Jim Croce love songs compilation album first and made off like bandits.

11. East Hampton (Where You Can Pretend You’re Ina Garten)

On our way back home, we stopped through East Hampton to live out our Ina dreams. And I have to say, I think we must have been looking in the wrong places, but the main street resembled more of a mall than an adorable hamlet where my favorite Food Network personality hangs out when she’s not chilling with Jeffrey in Brooklyn or Paris.

Though, we still enjoyed checking out the local bookstore (Book Hampton) and spotting Food Network b-roll footage spots like this old windmill (one of many in Long Island)!

We hope this is a helpful guide for planning a few days in Montauk! While summer’s almost over, you’ve got lots of time now to plan an off-season trip or get squared away for next summer!

Kaitlin is the younger daughter/sister in The Woks of Life family. Notoriously unable to follow a recipe (usually preferring to freestyle it), Kaitlin's the family artist, knitter, master of all things chili oil/condiments, and trailblazer of creative recipes with familiar flavors.

This site uses Akismet to reduce spam. Learn how your comment data is processed.

END_OF_DOCUMENT_TOKEN_TO_BE_REPLACED

Subscribe for the latest updates on new recipes, and get started with our family's Top 25 Recipe eBook!